How Do You Prepare for What Comes Next?

A father is gravely ill. He yearns for his wishes to be understood and honored with minimum drama after his death, while his spouse seeks ways to prepare their adult children and grandchildren for what comes next.


A patriarch faces serious illness. He yearns for his wishes to be understood and honored with minimum drama after his death, while his spouse seeks ways to prepare their adult children and grandchildren for what comes next.

Richard Atkins was diagnosed with a slow-growing but lethal cancer in his mid-seventies. The family had both the resources and the will to manage his illness for several years, but as he approached his 79th birthday, age and the disease grew more insistent. Facing the inevitable, Richard and his wife, Reyna, had a frank talk about their children and grandchildren.

“Everything is in order,” Reyna reassured her husband. “We’ve done as much as possible to create trusts to secure their future without overindulgence. You’ve made thoughtful financial decisions with our advisors. You can rest easy that our financial and legal affairs are all in order. But we haven’t talked with the kids yet.”

Two of those “kids” were well past forty, and one of their grandchildren was in his 20s. “I know they each have different expectations, worries, and hopes, but we have no idea what they’re really thinking, and I suspect they’re trying to guess what our estate plans are. I want to have candid conversations with them at the next family meeting.”

Her husband knew she was right but felt uneasy about the dust that could be stirred up at a time in his life when all he wanted was peace and goodwill for his family. “I want this to be a meaningful conversation,” he said, “not a forum for airing old resentments.”

Reyna, a forceful leader in the family, reached out to their advisors and their children. To the family education expert she said, “I need you to facilitate a conversation that may be hard for our children and their spouses, but we need to have it.” To her legal and financial advisors, she said, “I need you to be present during the weekend, to help answer questions that are bound to arise.” And to her children she said, “Your dad is not facing an emergency, but we want to address any worries or concerns you may have as we approach these last chapters of our lives, and we want to be clear about our wishes. Please come to the family meeting having thought about what questions or issues are on your mind. And I’d like to invite my oldest grandson, if that’s okay with everyone.”

Few family elders are as forthright and clear as Reyna typically is. She loves her family deeply, but her expression of love can sometimes be felt as less than nurturing. And her style, especially in this instance (forcing family to confront the impending death of her husband, their father and grandfather), could be experienced as harsh. Over the years, however, Reyna’s forthrightness has made her a dynamic leader who helps the family adapt to change.

This more personal conversation made the issues more real and the need for information greater.

Every family reflects a unique collection of intellectual and human capital assets. In the Atkins family, we find qualities that sometimes rub against one another in uncomfortable ways. New spouses, for example, sometimes find Reyna a controlling leader, while some of her children see her as the stabilizing force in the family. Richard is the nurturing elder and Reyna’s rock, but he is not experienced at being the strong one of the pair. The family is generally stoic, well practiced at not expressing emotion. So when the invitation to what was sure to be an emotionally charged meeting arrived, waves of anxiety rolled through each family, and more than one spouse considered opting out. The adult children had varying reactions. Richard’s eldest daughter thought, “Dad must be really ill. I’m not ready to say good-bye.” The younger son thought, “Maybe I’ll finally get some straight information about what our inheritance will be.”

Reyna worked with her advisors to craft an agenda for the meeting. She wanted to

1.    Ensure that everyone would feel safe in the midst of an emotionally charged family conversation;
2.    Invite candor and constructive sharing; and
3.    Provide real, meaningful information to each family member.

The agenda began with a dinner the night before the meeting and called for Richard and Reyna’s advisors to join the family the next day:

Reyna sent the agenda in an email to her family:

We’re looking forward to seeing you next weekend. Attached is the updated agenda.
Some reminders:

-Bring your completed sheets from the “12 Critical Things Your Family Needs to Know”  booklet, and think about the life events that would be hardest for you.
-Bring cartoons regarding death for the afternoon session.

See you and your children for dinner!

It’s hard for outsiders to imagine what Reyna’s family anticipated on receiving her email—with its reference to cartoons about death. But they all showed up for the opening dinner in good spirits and enjoyed the comfort of being together.

The next morning, their financial advisors took them through an update on their financial affairs. After lunch, Reyna excused the financial and legal experts  and signaled that it was time to turn to a more intimate family conversation. This could have been an uneasy moment, but leading with cartoons broke the ice and opened an exploration of how our society deals with death: humor, denial, sarcasm, tradition, rites, and mythology all work to manage life’s final event. This distancing technique helped the family ease into a more personal conversation.

Next, the family divided into small groups to discuss two case studies . One dealt with dilemmas created in a family when, while away on vacation, one member suddenly dies; the other covered the unintended consequences of unclear funeral instructions. The groups found conversations about “someone else” easier to approach.

This exercise prepared them for discussing Richard’s health and why Reyna and Richard had brought the family together. Reyna began by communicating her wishes in a matter-of-fact way: who she wanted to make medical decisions if she was not competent and Richard was not available, what she wanted done with her body upon her death (cremation), and where she wanted her ashes buried (in her husband’s burial plot, not with her family of origin). Her courage in putting these issues on the table was palpable and gave everyone permission to share their own thoughts and concerns.

The youngest daughter expressed a worry that if she became seriously ill, she could be a financial burden. Earlier insurance/estate-planning sessions had touched on such topics, but this more personal conversation made the issues and the need for information more real. The financial advisors (who were not at the table for this conversation) were able to help address her worry later, with specific information about what insurance covers and what decisions would affect her quality of care in the face of long-term disability or illness.

Another daughter wondered: in the face of personal decline (e.g., due to Alzheimer’s or some other form of dementia), who would confront the hard conversations with her? One of the sons-in-law sparked a conversation on “pulling the plug” (or not), and Reyna raised the topic of organ donation: she wanted to have her organs made available if they could be useful to someone.

The eldest grandchild, a sophomore in college, spoke of his online experiences after the death of a classmate, reminding his parents, aunts, and uncles that we now all have digital lives too—and that being clear about how to handle one’s “virtual” life is also important. As the afternoon wrapped up, the grandson asked Richard, “If you’re really sick and think you’re nearing the end, do you want us to come or not?” Richard answered, “Yes. Come.”

By the end of the meeting, tears had been shed and laughter shared. The family had spent a challenging yet vitally important afternoon confronting concerns that are universally felt but often suppressed or ignored.

Reyna’s courage and leadership made the hard conversations with her family possible. And by modeling how to use the financial, legal, and educational resources they had access to, Reyna and Richard taught their adult children and grandchild how to deal in an open, caring, and practical way with the end-of-life issues every family will face. 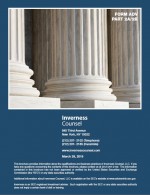 Learn more about our qualifications and business practices.   DOWNLOAD +

This is the first part of an initial 3-part Thought Leadership Series from Inverness Counsel authored by Joline Godfrey, an innovator in financial education for children and families, and author of Raising Financially Fit Kids.